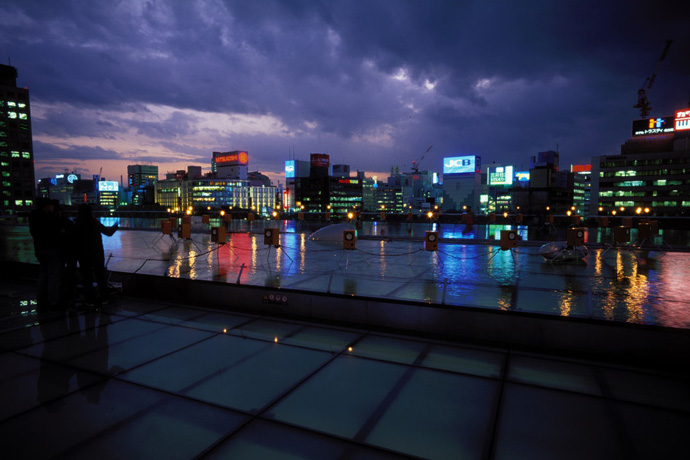 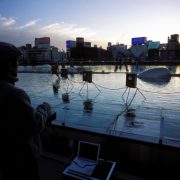 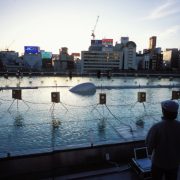 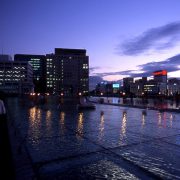 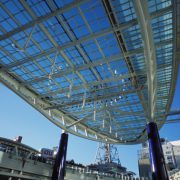 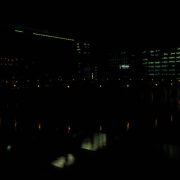 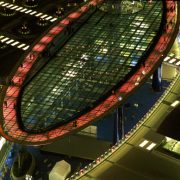 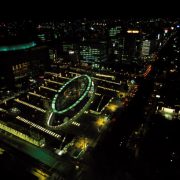 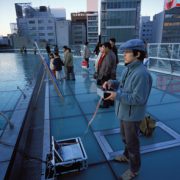 “Firecircle ver.2” is an interactive installation work with sound and lights.
32 speakers and lights are placed on the 17 meter diameter tube.
The exhibit is limited to the time when dusk changes into night.

Outline
This is a work that controls the lights and sounds of 32 light bulbs and speakers, which are placed in a circle with a diameter of approximately 17-meters.

Exterior
This work consists of 32 sets of speaker boxes that have 16-centimeter diameter speakers and light bulbs inserted into them. These are evenly spaced to form a circle with a diameter of 17-meters. With these speakers and light bulbs, various sounds and light patterns are created, while running effects of the lights and sounds are also created. Light and sound always synchronize within the paired set of light bulb and speaker. 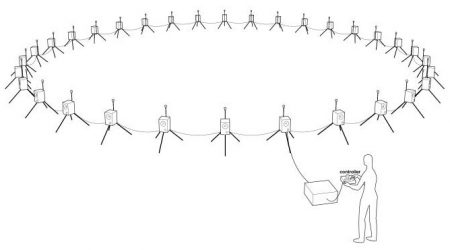 Interface
For this work, participants operate the sounds and lights by freely using a handheld controller. The controller has 4 dials that select the direction of movement and speed of the sounds and lights, the duration of the lights, their pattern, and the tone of the sounds. The operating interface is a generic revolving dial, which anyone can operate intuitively with just the touch of his/her hands. Therefore, the participants are not distracted with the operating system, and, instead, they can focus on the perception of the lights and sounds while operating. The revolving analogue dial provides a type of control that is seamless and subtle. 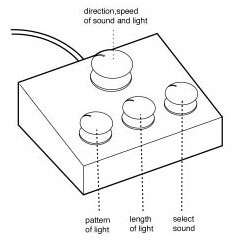 Installation site and hour
It is possible for this installation to be placed outdoors. In this particular context, it is preferred that the work be experienced during the hours between dusk and night. The ever-changing state of the sun and the expressions of the clouds become a background to the experience of the work and allow the participant to become a part of the natural landscape and time transition. According to the installation site, the size of this work can change from a diameter of about 8 meters to 20 meters.

System
The signal that is sent from the controller to the computer is converted to a MIDI signal and then converted to the electric signal with MAX4 that operates the on and off of the light bulbs and speakers. At the same time, with MSP4, the musical intervals and the tone are controlled in real-time. A speaker with its light on is creating sound. The intensity of the light changes according to the selected strength of the sound. Also, the
sound intensity changes with the speed of the light. If there is no operation with the controller for a period of time, it switches into an auto-play mode and the patterns and directions of the lights and tones change, automatically.

This work is a so-called Mandala that shifts in light and sound. A Mandala is a drawing with various diagrams, such as circles and squares, that is used in esoteric practices of Buddhism in countries like Japan and Tibet. It is clearly known, with the research of the psychologist, C.G. Jung, that Mandalas are closely connected to the human subconsiousness. In general, a Mandala is expressed as static, either two-dimensionally or three-dimensionally; however, it is said, in fact, that Tibetan monks and Jung see Mandalas as having movement. By way of sound and light, this installation expresses the psychological energy and dynamic movement that originally pertains to a Mandala. I hope that participants can enjoy a dynamic operation when freely controlling the lights and sounds of this 17-meter diameter circle. 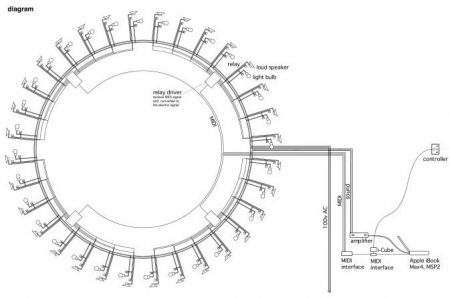